Day out with the phone

Hi
this week was mainly editing for me... however today was a bit out and about and thought I make again some use of my iPhone camera, capturing some spots in the city... edited them just a bit on the mobile photoshop app, so contrast, exposure and saturation.
Glad the weather hold up, so even if it was cloudy it wasn't raining.
Shows again, get your mobile phone out once in a while and snap away, you can get some nice shots all over the place, just keep your eyes open.

Have a lovely weekend 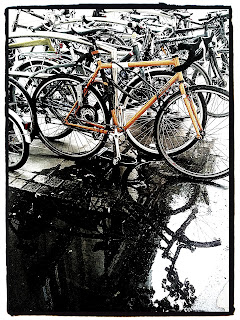 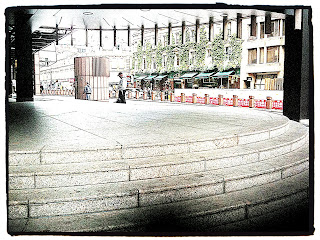 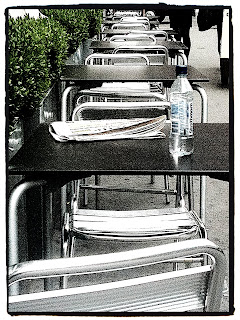 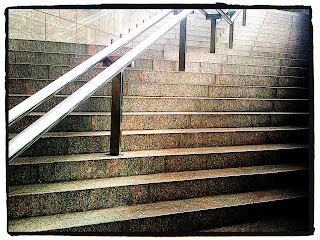 Posted by mostphotography at 09:16 No comments:

After 2 busy nights at Amika, I had a fashion shoot at Dizzyfinch Studios with stylist Federica Salto, MUA Alison Taylor, hair stylist Lewis Pallett and models Ariana and Erica.
As the shoot was part of an open day Dizzyfinch had, I had just under 1.5hrs to shoot...
The first shoot started with Ariana with 2 bigger outfit changes and 2 small adjustments and then finished the shoot with Erica. Lewis did some great work on the hair and so did Alison with the makeup.
Loved the designs Federica brought along and they were exactly what I was looking for in the beginning.
As I have been busy editing last nights work after the shoot, I only had time to upload the images from the shoot and have a quick look through in Lightroom and did some small colour adjustments but at this point haven't done any further editing but I thought I share some of the work with you. Some of the final images most likely will go onto my fashion page.
For the techies, I had a big octabox as main light, a softbox on the backdrop, hairlight and a big reflector on the opposite of the octabox to soften the shadows. I was shooting with the 70-200 as I love the sharpness on the lens and the zoom range allowing to quickly go from close up shots to medium length. Settings on f7.1-8.0, shutter speed of 1/125 and ISO 100-125.
Looking forward to hear your thoughts... 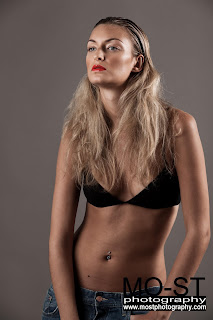 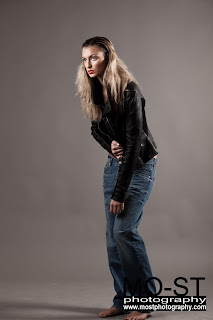 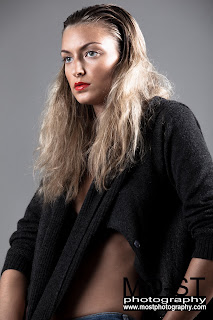 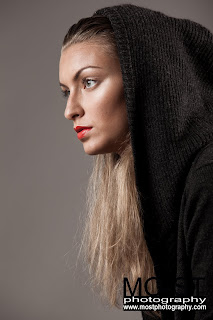 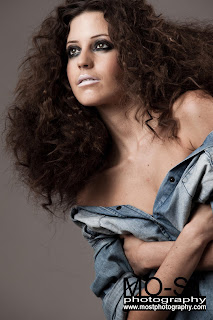 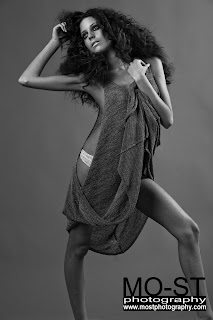 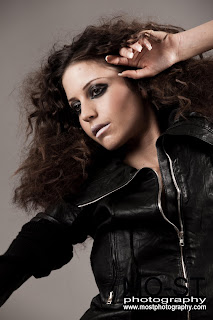 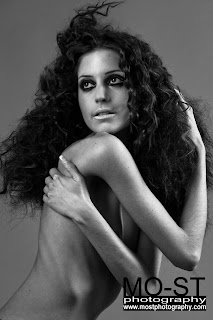 Posted by mostphotography at 13:36 No comments:

Another day another shoot...
yesterday I did another sports shoot, this time with freerunner Gary 'Surreal'. We were shooting around Greenwich at various spots including at the University where some of the shots below were taken.
Some of the jumps I was not only amazed on the distance he jumped but also at the accuracy.
Unlike a lot of other sports, freerunning is quite hard to capture on photo as a lot of the moves are quick spins so we ended up taking some video as well as photos with the main focus on high and long jumps rather than flips and spins.
To get the images as sharp as possible with thos quick moves I had to focus on a set point and hope that I get the shot in time. Furthermore I had up to 3 flash around all set to high speed sync. so that I could shoot with a shutter speed between 1/200 and 1/320 and f5.6-f14 depending on my flash settings. On the high jump I had a lower flash so that I was able to get 2-3 shots/sec as that was one of the jumps he didn't want to repeat as often. However on the other shots I often used full flash power to make him stand out more.
Big thank you again to Gary for whom the shoot was just another day training...for me it was a new inside view of another sport...
The images are only edited in Lightroom. 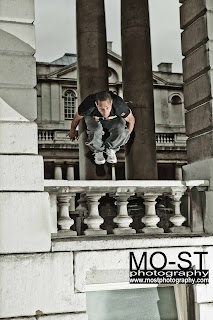 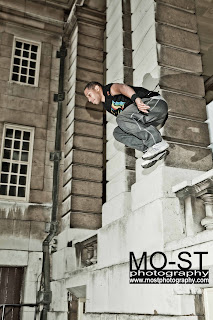 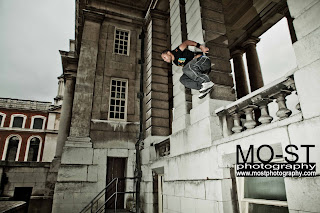 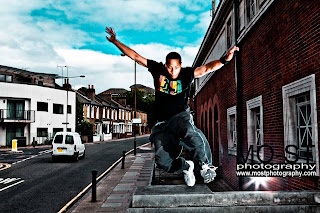 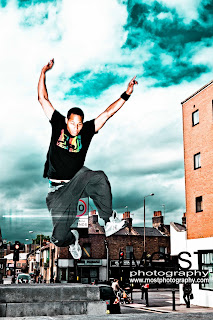 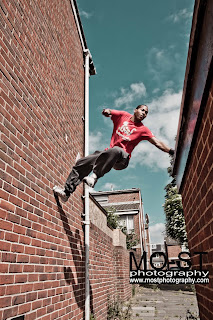 Posted by mostphotography at 10:20 No comments:

Last couple days have been busy again and will stay busy over next few days as well.
Friday night started of with another night at the club taking photos, then on Saturday I did a fashion shoot with KC, was a struggle to find studio as it was a last min. shoot but ended up getting a small studio that did the job. First images from the shoot are at the bottom of this post.
Saturday night was then again another night at the club to follow by a Sunday full of editing.
Monday was then back to Kingston to meet up with NU-JAM to speak again about the upcoming music video... after the second meeting we now have a pretty good idea what we want and it looks like it will be a fun shoot... of course once its ready you will get the link here to see it.
After the meeting I then met with Johanne for an art nude shoot, originally we wanted to shoot in a studio on Friday however as she lives in Kingston we thought lets try and shoot inside... so used black bedsheet and 2 of my flashguns combined with black reflector to block some light.. So shows you can achieve some nice effects even with just some simple lights.

Next up, Girl band photoshoot for promotional material for upcoming Tour in Germany to follow by sport shoot and then Thursday edgy fashion shoot....

Now, here the pictures from the last 2 shoots...
Enjoy 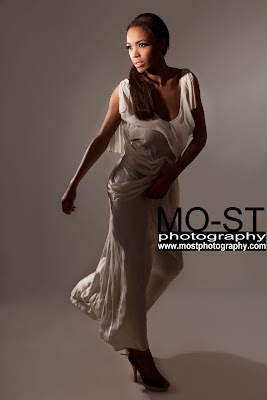 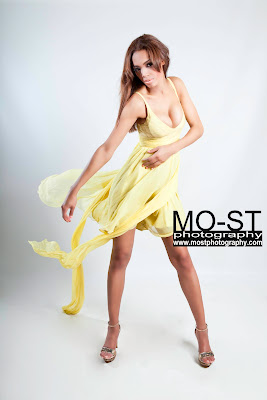 those two shots have been edited, filters used: High Pass, Median, Curves, Saturation
The following shots were only darkend and added contrast and changed saturation (in Lightroom) 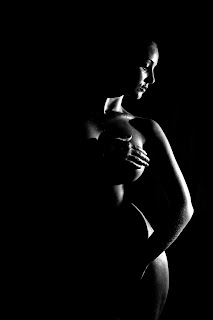 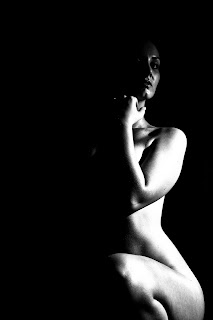 Posted by mostphotography at 08:54 No comments:

last week I spoke about the importance of camera/ equipment vs the artist with the result that its the artist and not the camera that matters most....
While in the kitchen I had a look at some of the basil and parsley we got and thought I take a pic with my iPhone and after a nice shot I though 'Hey, lets try the same with my Canon...' to make it fair, I edited both pics with the mobile photoshop application, so images from both devices are more or less same file size. The only clue I give, the shot of the parsley was on my iPhone... and as I don't have a marco lens for the 5d I had to crop the shot to get closer.... I think, if its just a small picture you want, you can easil;y get away with the iPhone....

Looking for your comments to see what you think which image is from which camera. 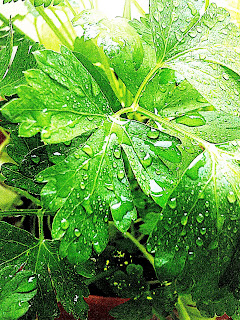 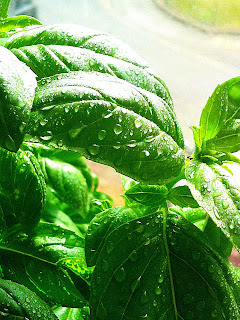 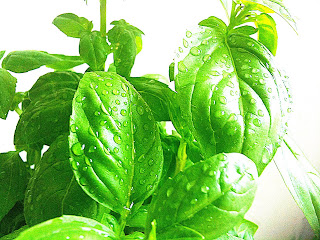 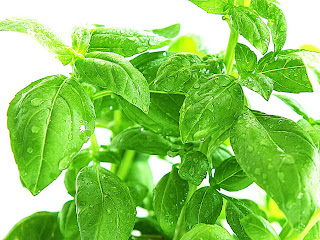 Posted by mostphotography at 04:59 No comments:

This week, upcoming music video and behind the scenes

sorry for a week of silence, lot happened since, Royal Wedding to capturing the most wanted but I wasnt involved in either of them I am afraid.
Weekend was 2 busy nights at Amika and then some editing the days after. Tuesday I did a behind the scenes shoot at Amika for a fashion shoot, always good to see how other people work as well as making new contacts.
Today, Thursday I had a meeting with Jamal from NU-JAM a band that I did a shoot with early 2010. They are getting to the next stage and now looking at doing a music video that I will film. For this we will need some models/ dancers as well as maybe a stuntmen and  free runners... so if you are interested in that feel free to send me an email to info@mostphotography.com Subject: EXTRAS
This video is something very exciting to me as this will be my first bigger video where I am not just taking part but involved from start.

The next couple days will be again busy, first 2 nights at the club with a big night on Saturday with special guest Fergie from the Black Eyed Peas, then a location based fashion shoot on Tuesday, a sports shoot on Wednesday and an edgy male fashion shoot on Thursday and possibly another shoot on Friday.

Wish you all a great weekend

Moritz
Posted by mostphotography at 11:32 No comments: